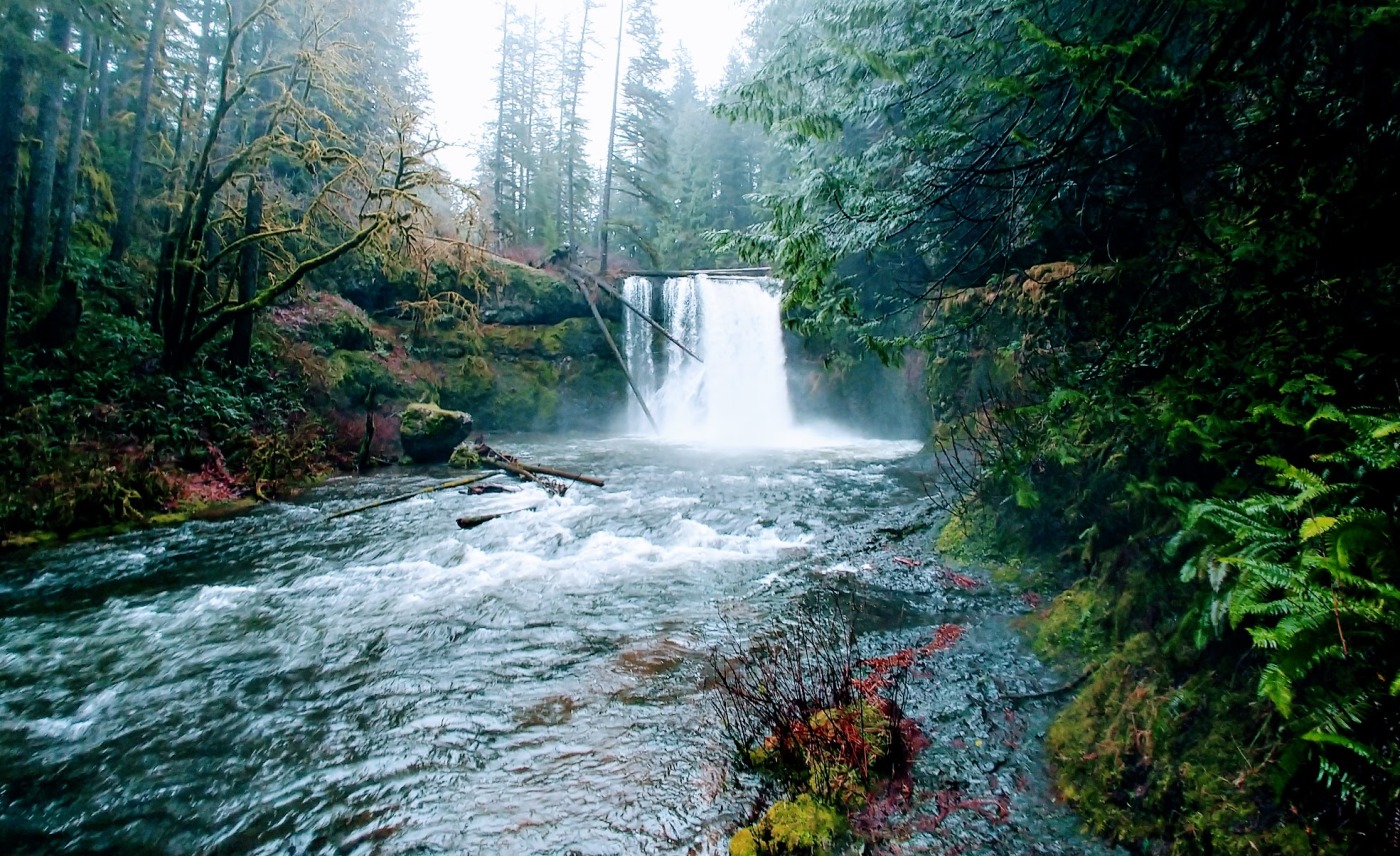 Catching an initial glimpse of South Falls before descending down and behind the waterfalls. This was the first time I’d been back to Oregon since my Columbia Gorge trip back in November. I was happy to be back exploring my Oregon roots and eager to put a small dent in my ever growing list of hikes yet to complete in the Beaver state.

The Trail Of Ten Falls is a hike that may be better experienced in the winter months due to the waterfalls being full and seemingly bursting at the seams while also having the benefit of smaller crowds. By the time I arrived around 8:30 in the morning on Saturday I saw at least a dozen vehicles in the parking lot but at least one hundred empty spots so I knew the potential for a crowded hike was real. The more I hike the more I realize there is so much more to explore than I could ever get to but I’m sure going to try!

Long before I arrived at the trailhead I knew it was going to be a damp day so I arrived fully geared up and ready to get wet. I’m intimately aware of the rain and have spent a lot of time in it but this was on another level. At times the rain was sideways and unleashing a torrent of liquid so intense that after a while everything was drenched. There are certainly times when the rain dampens the day but this wasn’t one of them. I can’t recall many hikes where I thought the rain made the hike better but this one may be the first.

In the beginning I saw a handful of people on the trail but almost two miles in and the place was empty. I could tell that most people were not completing the full loop. There are days when the doom and gloomy weather rain on my parade. On these days I sometimes get discouraged and find it hard to get started let alone complete but a trail but this one had me giddy from start to finish. I was smiling as the rain pelted my glasses making the trail a blurry mess. I decided to forgo my glasses and continue the trek.

Middle North Falls are easily accessible by a short side trail that leads behind the falls and then out the other side and heads up for a short trail that leads to nowhere. The soul purpose of the trail seems to to gain access to behind the falls. The other waterfalls I walked behind were part of the actual trail. Standing inside of what felt like a carved out bowl gave me the feeling that I was presenting myself on mother nature’s palm and leaning into her majestic waterfalls misting and thundering before me.

The experience of walking behind a waterfall is quite unique and it’s not a feature that I see on many trails. But beyond that having ten falls on one hike is truly special. The last time I stood behind a waterfall it happened to be at the tail end of the Eagle Creek trail called Tunnel Falls, located in the Columbia Gorge, one of the many gems in that area. That trail is now closed due to a fire in 2017 but the memory is intact.

I notice a lot of these types of signs on heavily used trails that are frequented by families and tourist. The trail of ten falls had no shortage of warning signs in several places. People forget that nature can kill you in an instant without a warning but most of the time there is plenty of warning and a sign shouldn’t be a replacement for common sense.

One thought on “Trail Of Ten Falls”

justwannahike.wordpress.com/
Mark All My Words

I hope that someone sees this page and decides not to give up...

Hikes and Travels in Colorado and Beyond

A daily selection of the best content published on WordPress, collected for you by humans who love to read.